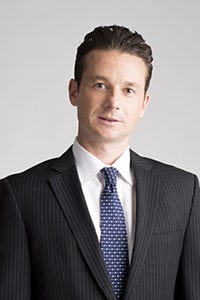 Travis Corby sat down for a Q and A session to discuss his practice, his experience with the firm and how he came to join Shernoff Bidart Echeverria LLP.

What year did you graduate law school?

I graduated in 2009 from Pepperdine.

Did you begin working for the firm right away?

What attracted you to this firm?

I had known Bill [William M. Shernoff] growing up and I was always really interested in hearing the stories of his incredible victories. I loved the idea of helping everyday people fight back against large insurance companies. I wanted to follow right in his footsteps. It also helped that when I joined the firm, Bill was right in the middle of the of the fight to stop health insurance rescissions in California. Insurance rescission is such a horrible practice in my opinion, and it was really rewarding to jump into the forefront of that cause.

Can you explain what the rescission cases were?

Health insurance companies were engaging in a practice, where they would accept insurance applications from consumers without doing any medical underwriting upfront. Consumers would then pay insurance premiums thinking they were fully protected with health coverage.  If there were no major claims made on the policy, the company would continue accepting premiums without investigating the application responses. But the companies also secretly put a system in place, where any large claim would trigger a rescission investigation. The companies employed an entire department of employees whose sole job function was to review the entire medical history of an insured who made one of these pre-determined large claims, and compare it with their initial application. If any inaccuracy or any incomplete response was found, the company would rescind the policy. The consumer would then be left responsible for all the medical bills, and without any health insurance coverage for their future care needs. Someone would get diagnosed with cancer or have an expensive surgery, incur thousands, if not millions in medical bills, and then insurance company would send them a letter informing them they no longer had health insurance  and were responsible all past medical bills. The insurance company didn’t even care whether the application omission was intentional or not  This practice was so unfair to the consumer.

What has your practice focused on since then?

I now do a lot of life insurance rescission cases. Health insurance rescissions have been outlawed by the legislature, unless the insurance company can prove fraud. But life insurance companies still rescind life policies through the same scheme. I’m also very involved in medical necessity cases, which I think is just as bad a practice as insurance rescission. In a typical medical necessity case, a health insurer will get a request for pre-authorization for an expensive surgery, and deny it, contending that the treating doctor recommended a surgery that is “not medically necessary.” Many times the insurance company will force the patient to get less expensive care or a cheaper alternative to surgery, even though it against the treating doctor’s advice. Patients can be left for months or years waiting for a corrective surgery, or even sometimes a life-saving surgery.

I’m also heavily involved in other types of healthcare litigation. I have handled cases where health insurance companies will deny entire claims, because the correct pre-authorization was not obtained prior to service.  Really, there is no dispute that the service is covered, it is just a dispute between a provider and the insurance company over the price of the service. But in the end the insurance company will leave the patient to foot the entire bill. I also handle various types of out-of-network provider cases. There are disputes over under-reimbursement for out of network care. Insurance companies have even started to deny a large number of claims made for out-of-network surgical facility treatment, because the insurers don’t like their insureds using these out-of-network facilities and having to pay out-of-network rates. I also am involved in disputes over “experimental or investigational” care. These disputes are usually over very expensive surgeries or treatments, where the insurance company is accusing the treating doctors of prescribing non-generally accepted methods of care.

I also handle disability claims, property claims, indemnity claims and auto claims. Indemnity claim denials often have smaller amounts of money at issue, but I have seen some of the most unreasonable practices with this type of coverage. I’ve also seen a rise in auto insurance disputes. Auto carriers can be very aggressive during the claims process. They can force consumers to sit for abusive EUOs and to comply with exhaustive document requests. All of this investigation has nothing to do with the actual claim. Unbelievably the insurer ends up falsely accusing the insured of fraud as way to deny their straightforward claim.  It can be really disruptive to the insured and subject them to unwarranted legal problems.